Staying Serene in Turbulent Times: How to Turn Anxiety into Positive Action In this day and age, we have good reason to toss and turn in our beds at night. As our nation faces climate catastrophes, acrid politics, stubborn inflation, unpredictable virus variants and hot-button issues like abortion and guns, there’s good reason our collective anxiety levels are at a high pitch. A recent Yale survey found that 70 percent of Americans report being anxious or depressed about global warming, and a Penn State survey this year found that 84 percent of us say we are “extremely worried” or “very worried” about where the country is headed. Researchers are coining new terms: “polycrisis”, for complex, cascading crises in interacting systems, and “pre-traumatic stress disorder”, when fear of an outcome makes it as good as real to our psyches.

“It’s easy for people to feel overwhelmed now, feeling there are breakdowns and threats on many fronts. People can wonder ‘Where do I even start?’ and feel powerless and hopeless and numb,” says psychiatrist Janet Lewis, M.D., a founder of the nationwide Climate Psychiatry Alliance and a University of Rochester clinical assistant professor of psychiatry. “We are part of a complex system that is moving into new ways of functioning, but there’s no way of predicting ahead of time exactly what all the features of the new ways of operating will be. That makes it impossible for us to wrap our minds around everything that is happening.”

Still, she adds, “We are also by definition part of the system, and therefore have a responsibility to do what we can. We can’t sit on the sidelines and merely hope that things transform in good directions. The situation being so serious also means that what we do now is really important.”

To move from anxiety into effective action, mental health experts advise several strategies: taking a wider perspective, building resilience through self-care and taking individual steps to make a collective difference. As the Dalai Lama encourages, “If you think you are too small to make a difference, try sleeping with a mosquito!”

News reports almost always sound dire—just like the amygdala of our brains, journalists often see their function as focusing on threats to alert us to dangers. “Still, if you take the long view of history, we are much better off than we were 200 years ago or 1,000 years ago, but it took many years to make those changes,” counsels Robert L. Leahy, Ph.D., director of the American Institute for Cognitive Therapy and author of the bestselling The Worry Cure and the upcoming If Only. “We never know if something is hopeless until we have all the data, and we seldom have all the data,” he says. “And when it comes to political emotions, many of the predictions that are made by the ‘talking heads’ in media never come true.”

Leahy counsels patience: “Social change does not come about by one person doing something. That usually comes about by a long process of millions of people changing their attitudes and changing their behavior. Small efforts can be made on a daily basis that move this slow process forward. We need to take a longer view, rather than expect immediate change.”

In this ongoing process, anxiety has its rightful place. “Anxiety makes us look around, figure out solutions and act. This can absolutely be turned into something positive,” says neuropsychologist Barbara Easterlin, of Jackson, Wyoming, an expert on eco-anxiety who is on the steering committee of the Climate Psychology Alliance of North America. “Doing just one thing to help the planet consistently helps defeat anxiety.”

Taking action moves us into our power—as 15-year-old Greta Thunberg demonstrated by holding a sign outside the Swedish parliament. Personal actions matter because numbers add up. Only 25 percent of individuals in a social group need to make a shift before significant social change follows, conclude researchers at the University of Pennsylvania School of Engineering and Applied Science that analyzed a decade of societal changes in voting, health, technology and finance. Once a group reaches that tipping point, it can trigger a change in the rest of society, says study author Damon Centola, Ph.D., author of Change: How to Make Big Things Happen.

Fears about the shape of the planet and nation are often piled on top of our everyday living anxieties about family and finances, which can induce emotional overload. “We all have a ‘zone of resilience’ or ‘window of tolerance’, outside of which we become more reactive, less able to function effectively. But it is not fixed. We can learn tools to expand it and cultivate the capacity to be with more,” says Easterlin. Therapy can be a part of that process by challenging us to examine “the mental narratives that can exacerbate distress,” says Leslie Davenport, a climate psychology consultant and author of Emotional Resiliency in the Era of Climate Change. It’s important to find a therapist, she says, that “validates that your feelings are a normal response to an existential crisis.” She has helped develop new programs at the American Psychology Association and the California Institute of Integral Studies to train therapists in treating eco-anxiety. For low-cost online support, the Good Grief Network offers a 10-step, 10-week program to help process personal anxiety and grief about climate change. People are also sitting down to share their distress at climate cafes, small local gatherings springing up across the country and globe, including some online.

Getting enough sleep, eating healthy and exercising are also key self-care strategies. When anxiety strikes, psychologists advise shifting attention from the head to the body, using such approaches as mindful breathing, dancing and grounding. Meditation, easily accessed these days through apps like Calm and Headspace, helps us to enter into what religious and spiritual teachings call “the still point within.”

Rather than “doomscrolling” when anxiety mounts, cutting back our media use can significantly lower stress levels, studies show. Wise media strategies include choosing well-established, credible news sources; reading rather than watching the news to lower its emotional impact; limiting news intake to 10 minutes once or twice a day; taking a “news fast” on occasion; and passing up sources that incessantly feed fury.

On the other hand, it’s essential to find sources for hope, an emotion important in recovery from anxiety disorders, according to a study in Behavior Therapy. Googling “good news on climate change” will bring up articles about alternative energy growth, new super-enzymes that eat plastic rubbish and black rhinos coming back from the brink of extinction. Although dystopic books abound, others offer hope, such as Drawdown, with its sensible, scaled-down strategies to stop global warming by 2050.

Virtually no one can take on all the problems of the nation and globe at once—and the good news is that unless we hold high public office, we don’t have to. Instead, “In taking action, focus on what you are good at, what your sphere of influence might be,” advises Lewis. “What are you most heartbroken over? Get involved in that and allow yourself to feel really good about what you’re doing and other people are doing.”

By narrowing our focus, we can hone in on an issue and figure out our part in its solution. “We need a broad range of collective action for transformation,” says Davenport. “For climate change, a teacher could bring social-emotional learning to climate education into the classroom or start an after school ‘green club’; an artist could use their creative medium to communicate about climate in a moving way that could engage others; a nurse could create a waste-reduction initiative within a medical setting. These efforts all have ripple effects and help to elevate each other.” In one recent study, people were found to consume less energy if they believed their neighbors did so and personally cared about conservation. Our neighborhoods are the place to take the small, meaningful steps that address the “crisis of connection” underlying rancorous national crises, says New York Times columnist David Brooks. He advocates “radical mutuality”, saying, “Nothing we do, however virtuous, can be accomplished alone.” Through simple actions like having casual conversations around town, pitching in to help a family in crisis, bringing a salad to a block party, tutoring a child or holding a civic post, we build the warm relational bonds that strengthen communities. As we meet others that feel as strongly as we do about our issues, our numbers start building and collective action can unfold.

“Independent of political beliefs, many people can find common values such as wanting safety for their families, a clean environment with clean waterways and recreation in natural environments,” says Easterlin.

That, in turn, helps lower our distress. A recent Yale study found that eco-anxiety was linked to depression only among students not involved in group activities; those engaged in collective action such as being part of an environmental group, working in a letter-writing campaign or going to events or protests did not spiral downward emotionally. “Personal transformation and social transformation happen simultaneously. When you reach out and build community, you nourish yourself,” Brooks says.

As Thunberg has put it: “When I’m taking action, I don’t feel like I am helpless and that things are hopeless, because then I feel like I’m doing everything I can. And that gives me very much hope, especially to see all the other people all around the world, the activists, who are taking action and who are fighting for their present and for their future.”

Health writer Ronica O’Hara can be reached at [email protected] 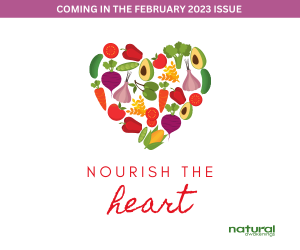 How to Create Powerful Crystal Grids